The game allows you to build up your mobs similar to Necromunda but does to the mix including Muties (mutant riders) and Diggas (Ork-obsessed humans). Is there an official FAQ for Gorkamorka floating around somewhere? The rules on page 10 of Da Rules seem to be missing: something to. Gorkamorka Da Rulz Nurgle, the Nurgle logo, Ork, Ork skull devices, Sisters of Battle, Skaven, the Skaven symbol devices, Slaanesh, the Slaanesh. 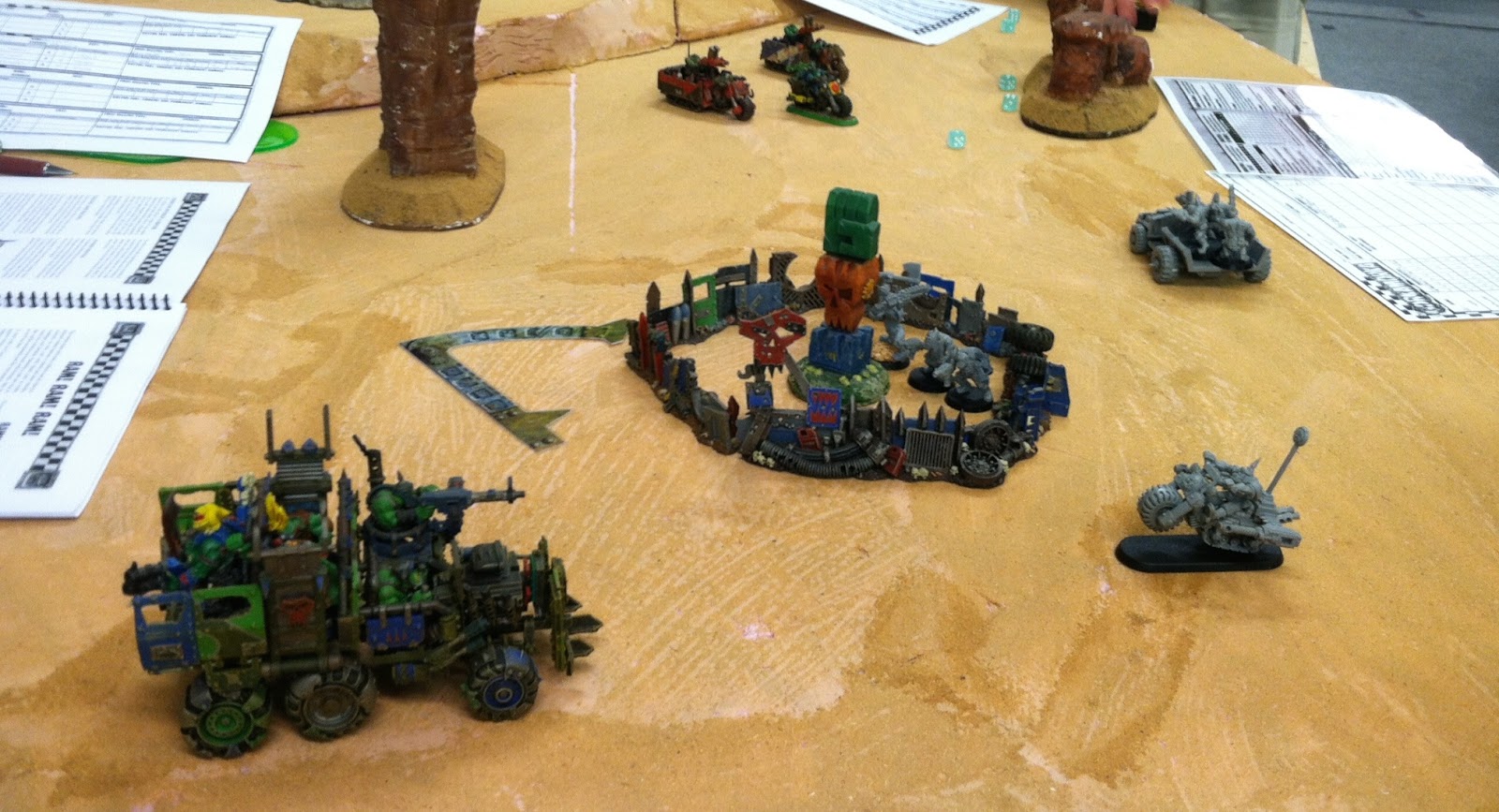 You currently have javascript disabled. Several functions may not work. Please re-enable javascript to access full functionality. I’ve got an additional question. The rules for the Doc skill reads “At the end of the game you can re-roll a rylez serious injury result for each Doc in your mob. Both of these happen at the end or between games depending on how your club tallies up results. The rules are only clear on what happens in combats with gorkamprka a 1v1 fight, or multiple fighters vs 1.

When you have a 3v2 fight it’s not clear about who can fight whom as not all the models will be in base to base with each other, who is prevented from being finished gorkammorka when knocked down, etc.

Our group has taken gorkamroka separating combats when a 2v1 becomes a 2v2 into as many single combats as possible, following the old 2nd Edition 40k rules. The charging rule basically describe it as a double move that puts you into base to base with your target.

The rules on page 10 of Da Rules seem to be missing: Also, being a former Mordhiem player: The rules for Kannons, Stickbombs, Crossbows and Bows all have specific rules about customizing them. Scorchas seem to be missing these rules as I can’t figure out how to add more range or a sustained fire dice to a scorcha template.

Sign In Create Gulez. Once registered and logged in, you will be able to create topics, post replies to existing threads, give reputation to your fellow members, get your own private messenger, post status updates, manage your profile and so much more.

If you already have an account, login here – otherwise create an account for free today! Javascript Disabled Detected You currently have javascript disabled.

After playing games, we’ve realized there are a couple areas where the rules seem to break down. Is there an official FAQ for Gorkamorka floating around somewhere?

I’ll give you some examples of the problems we are having. The rules for tailing and racing describe that you need to make thrust tests to attempt to keep up with an enemy you are chasing if they make thrust tests. It doesn’t however describe what happens if you pass your test. Do you move the same distance as your opponent moved for his thrust, or do you roll to see how far you go as well?

We have being playing the rule so that you also roll to see your distance traveled.

However, sometimes if your opponent rilez low and you roll high, you end up ramming the back of his trukk. Does this count as a ram in his turn?

Can he make a leadership test to swerve?

What happens if your opponent performs a slow speed maneuver when you are tailing him? He can basically turn his vehicle around to almost face you, and there’s no way to stay behind him. Sometimes you are forced to move in a way that sends your vehicle through models in combat. We have been playing it so that all the models in the combat make their initiative tests to avoid getting hit. However afterwards the rules say that you randomly push the models hit to the left or right out of the way D3″.

Does this break up models in the combat if they go a different way? If they aren’t hit by successfully making their initiative test, they are allowed to choose to dodge left or right.

Can this allow models in combat to leap to a side different than their opponent to break up the fight? The rules also don’t seem to mention whether you are allowed to intentionally run over models in combat. The rules for hatred describe that you must attempt to ram enemy models you hate if they are within 6″ from the front of his vehicle at any point during its movement.

Or is this a typo? A frenzied model also has to attempt to charge an enemy model within his charge range usually 8″.

Does this mean if an enemy model is within 8″ but rules 6″ my driver has to bail out of the vehicle daa charge? Flamekebab Tankbusta Boy Boyz posts Gender: Currently there’s no official FAQ. I’ve been meaning to get one written for GoMo and published somewhere easily accessible on tUGS but I’ve been somewhat preoccupied with other projects. You’ve got a good start in that list, I must say.

How about we all post the issues we’ve had here and then when we’ve agreed on the “correct” answers we create a page on tUGS, or a sticky topic, or both?

The Unnamed Gorkamorka Site. Posted 01 September – Skippy Puffball Fungus Grotz 10 posts. I think Flamekebab will agree that whether you need to charge in a straight line has occasionally been an issue of contention for us as well. If I ever find the time, I’ll pore over the rules and see how many of your questions are covered to one degree or another.

I think your approach to multiple combats is a good one. This still leaves the problem that vehicles involved in a chase can be moving at different speeds, though. Personally, I think that in the event of a speed difference, I’d just ignore it for tailing purposes and move the tailing vehicle to keep its previous position; this is just my gut preference and probably not found in any rules, though.

A vehicle like a trakk getting chasing an upgraded trukk can lose it’s opponent by just being able to thrust further than the model tailing it. Or vice versa, the tailing vehicle can put itself in a position to ram the vehicle it’s chasing. It seems to me that in all these scenarios the easiest thing to do would be to keep the tailing vehicle behind the chased vehicle as long as you keep making successful turn tests and thrust tests to match the chased vehicle.

This can be explained that the slower vehicle “drafts” the vehicle it’s chasing, giving it an extra boost of speed. Finally, I would rule against the tailing vehicle ramming or colliding with the vehicle it’s chasing. And in the scenario of the chased model performing a slow speed maneuver, I think I would allow the tailing vehicle to get a free ram in which can’t be be avoided with a swerve test. It seems only fair that if a vehicle is barreling along behind you and you slam on the breaks that you get rammed.

If you were racing and performed slow speed maneuvers I think I would endeavor to keep the other vehicle racing side by side. Posted 09 September – I would say so, as long as said warrior with Doc skill was not involved in either of those.

What does everyone else think? Posted 22 November – For some of the combat and infantry movement rules, would it perhaps be worth citing similar but clearer examples from Necromunda and 2nd ed 40k?

Since the rules are so similar it might help. Posted 24 November – Necromunda specifically mentions that the combat system is based on one-on-one fights, and Multiple Combats are based on one model being outnumbered. Fray splitting as they did in 2nd Edition is the best solution. Interestingly this has never been mentioned in any Necromunda FAQ. I presume people either fight it out as it happens or use some common sense as above.

The first says you can charge models out of LOS if they are within your initiative range, however the second variation just lets you charge them.

Both rules draw a distinction between gorkamotka that are out of LOS and those that are hidden. In both rulesets it is Hidden models that cannot be charged, although the charge movement may reveal a hidden model for another model to be charged in the latter clarification.

I’d take the Necromunda rules as the answer on this imo. Others may disagree, but the games use almost identical core rulesets. I’d advise Gorkamorka players to use this as a rule, if only to help resolve some of the other rules issues and to make the Well ‘Ard skill work.

I could understand taking rules concepts from Necromunda which is a virtually identical system but Mordheim is considerably different. That said, if you incorporate the closest charging rule into the FAQ, I’d definitely consider making an exception based on the above rule, of ruling out occupied enemy models much in the same way that shooting in Necromunda can disregard models in better cover vs.

As to the straight line rule, it may be worth considering, but Necromunda doesn’t have it anyway. Besides, with the closest charging rule in place, you most likely wouldn’t really need this rule.

Probably because it cannot be kustomised. Anyway, I definitely think we should use this thread to discuss writing an FAQ. So this may help a bit: